In 1864, William James Carlton began selling advertising space in religious magazines under the company name Carlton & Smith. James Walter Thompson joined Carlton’s firm in 1868. As the story goes, Thompson rapidly became their best salesman, purchasing the company in 1877 and renaming it the James Walter Thompson Company (JWT). Realizing that he could sell more space if the company provided the service of developing the content, Thompson hired writers and artists to form the first known Creative Department in an advertising agency.

Straight-forward as the idea may seem now, it was innovative enough to lead to the rise of the archetypal, full-service Agency of Record.

But the world has changed since 1877 and so has the idea of what an agency can be.

Economist Carlota Perez, in her excellent book, Technological Revolutions and Financial Capital: The Dynamics of Bubbles and Golden Ages, writes that since the creation of JWT, we’ve seen the birth of two tech revolutions that have impacted the global economy. Around the turn of the 20th century was the age of mass automation, which led to mass-produced goods, automobiles, suburbanization, and the rise of agencies. Today, we’re living through the information age, which is defined in part by the rise of broadcast and digital channels.

Initially, this era led to the proliferation of specialized agencies responding to the marketing needs of increasingly global companies. Now, it’s transforming the way brands hire agencies, catching off-guard those who don’t realize companies need more than continuity from their ad firms.

What does it mean for brands and agencies to work together in an era defined by information, communication, and connectivity? Answering that means first understanding the technological and socio-economic forces that have molded our industry’s priorities over time.

Mass Automation and the Agency of Record

As visionary as JWT was, its biggest challenge was finding a market of brands that cared about marketing and therefore cared about the power of an ad agency. That gift came in the form of Henry Ford. Some say that the gift Henry Ford gave us was the automobile, but I’d argue his true gift was the supply chain and the rise of automation. Alongside a new model for building cars we could also build mass-produced goods like Hershey’s Kisses, Wrigley’s Gum, Bayer’s Aspirin, and Tide’s magical washing detergent.

This is the era that gave birth to the idea of brand management at Procter & Gamble. Mass automation allowed major corporations to bolster and stratify their product and brand portfolios. Brands could grow at a scale that had never been seen before, and they would need advertising and brand management to realize that potential.

The rise of mass automation was followed by highways, giving companies a cheaper way to transport those products. And eventually, highways gave way to suburbs. The latter provided new inexpensive locales for workers — so that’s where companies began to move to.

Corporate migration from urban life to suburbia in the 1950s meant that brands would be further from the creative advertising talent who were closer to cultural touchpoints and who ultimately resided in cities.

Agencies rose to the challenge of curating that talent. 1956 saw the kickoff of the interstate highway system. Correspondingly, the 60s saw the first large jump in agency foundings since JWT, according to an analysis of data from Vitamin Talent and The Barbarian Group. It is quite interesting to think that the greatest moment for agencies was concrete, white picket fences and the automobile in every garage. 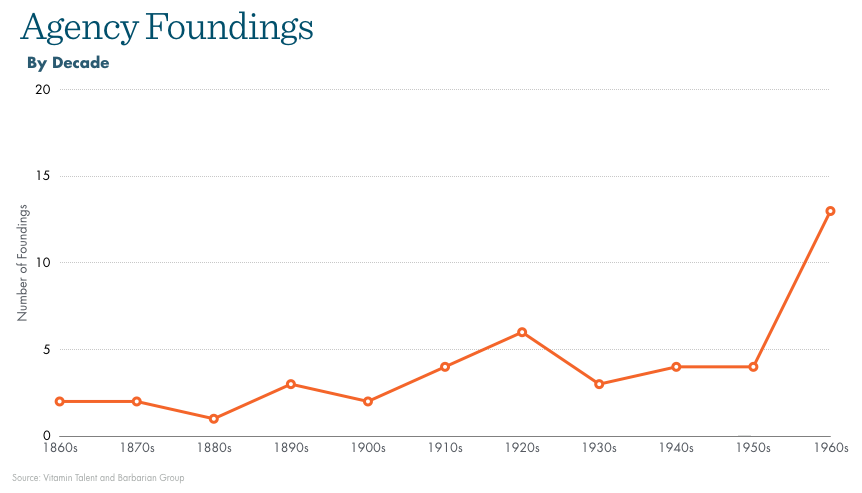 Until only recently, a brand would typically rely on one or two agencies for its important marketing activities: generating ideas, negotiating prices with ad sellers, and buying media.

The sands were shifting well before the rise of the Internet as we know it. The information and telecommunications age started in earnest in 1971 with Intel’s microprocessor. But by then we’d already seen the kickoff of mass broadcasting (TV and radio) and standardized global transportation systems. In the 70s, more countries worldwide became wired for telecommunications. These combined to bring us global markets.

In a globalized world, brands often had to look beyond their primary agency to find a firm that could service local subsidiaries; the typical full-service agency didn’t have offices in Kenya.

And in the ‘90s, the beginnings of media fragmentation and digital gave rise to entirely new types of agencies, even as they propelled globalizing forces. Firms emerged that specialized in email, media planning, websites, digital creative, TV creative, and other fields.

Brands readily sought these new entrants; traditional firms weren’t immediately drawn to those low-margin services. That meant new opportunities for entrepreneurial marketers. There were more agencies founded between 1990 and 2010 than the prior 130 years combined. 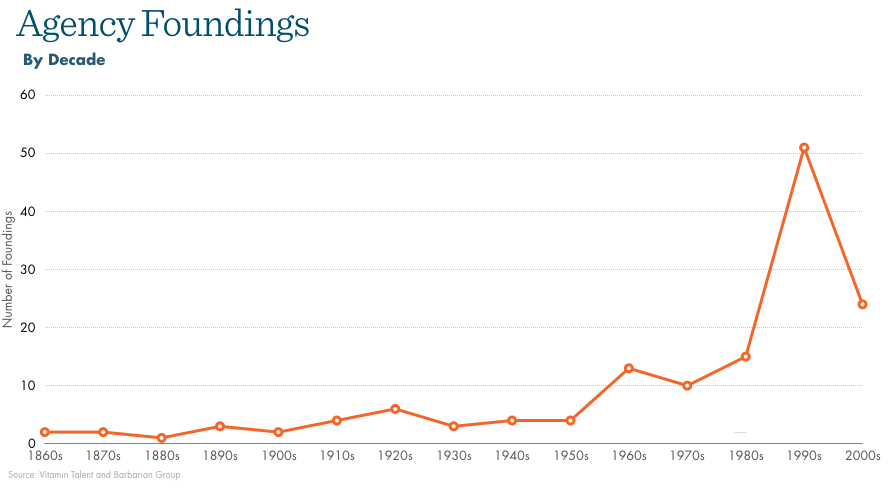 Even as agency rosters ballooned in size, organizations would still commonly retain primary agencies of record. They still wanted a partner that could integrate and manage the multiplicity of efforts and ideas being generated. Plus, large buying groups emerged that could purchase media at the regional and global corporate levels — granting price advantages to the brands housed within the enterprise.

Moreover, up to this point, companies still relied on outside agencies for creative work because creative talent still lived in urban areas — and internally, Marketing departments didn’t command enough respect from senior leadership to be able to build internal teams.

But things have changed once again. This article explains just how hardware, software, and the Internet are combining to yet again change the ways marketers work with agencies, just as mass automation helped the agency model take off.

Thanks to Victor Gamez and Christy MacLeod for their help on this article.