Why the 2016 Presidential Election is Pitting Brands Against Politicians

The Iowa Caucuses are just around the corner and the American voting public is witnessing a unique phenomenon in 2016 — A national election cycle that is breaking spending records in advertising yet failing to produce return on campaign’s media budgets.

Meanwhile, brands are being affected by political advertising in tangible ways. New legal precedents set by the U.S. Supreme Court have given Super PACs the opportunity to spend more on television advertising, causing brands to suffer from a greater political “crowd-out.” In addition, brand advertisers experience a shift in audience engagement due to political saturation in the media.

All that is to say: there are a few major obstacles that brands will need to successfully navigate to make the most of their marketing during the 2016 election cycle.

The 2016 Election­­ — An Historic Increase in Campaign Spending

The 2016 election cycle is poised to become a paradigm shift in political advertising and media buying as the cost of the 2016 U.S. elections are expected to reach $11.4 billion. This marks a substantial increase from the 2012 elections when the Federal Elections Commission (FEC) cited a total of $7 billion in campaign spending. 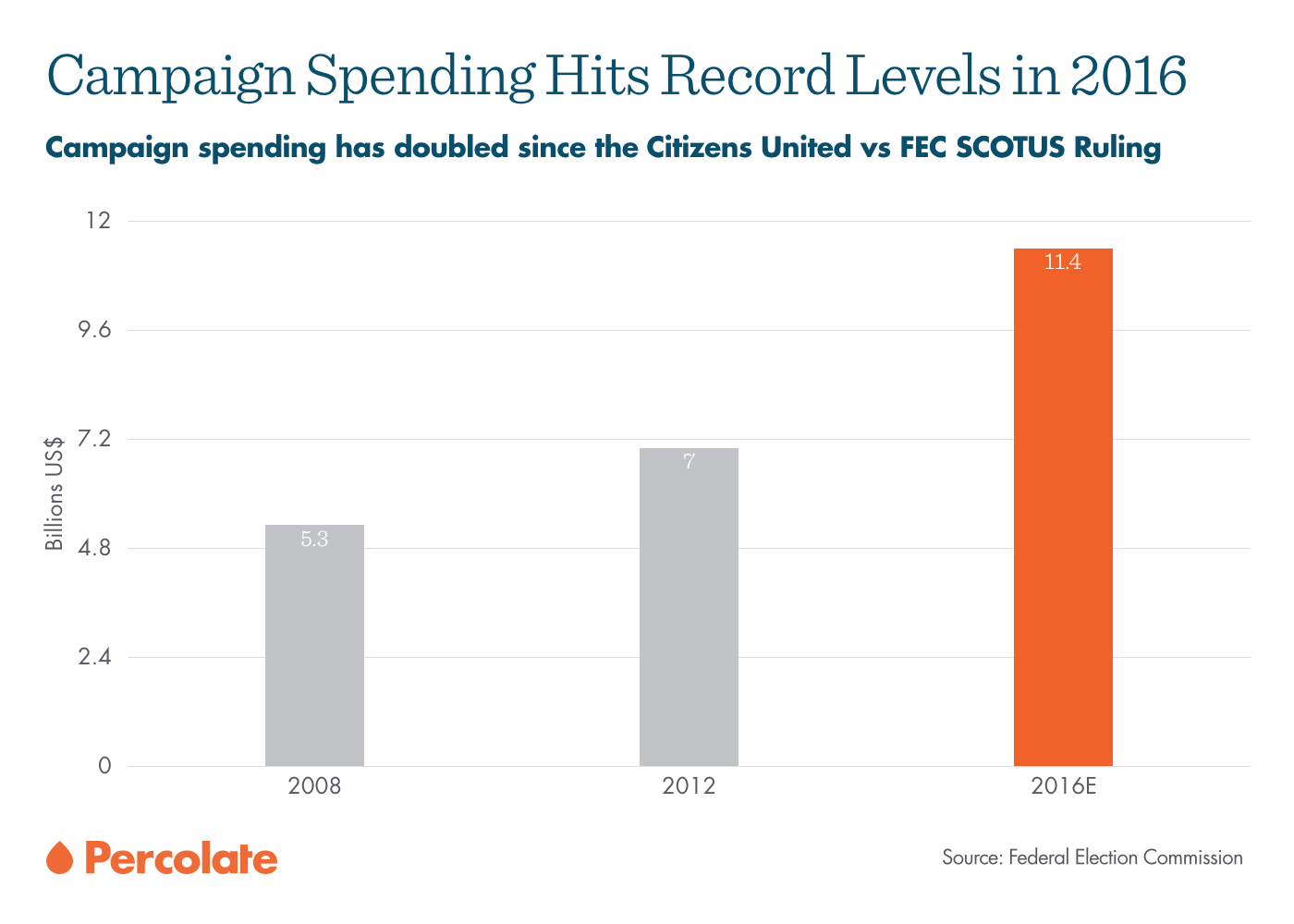 This skyrocketing election spending can be traced back to the 2010 Supreme Court Decision Citizens United vs. Federal Election Commission. This decision set the legal precedent that independent political spending is a protected form of free speech under the First Amendment.

While corporations and unions may not give money directly to campaigns, they are allowed to either support or denounce a candidate through other means — including political advertising.

This has lead to the rise of Super PACs that have no spending limits in their attempts to persuade the voting public. These Super PACs also have the ability to sustain candidates for longer periods of time, despite low poll numbers, which may account for candidates staying in Primary races longer than in past elections.

Running an American Political Campaign in 2016

In addition to the effects of Citizen’s United, what makes the 2016 election unique in respect to election cost is the number of candidates running in the Presidential Primaries. As of January 2016, there are a total of 15 candidates — 12 Republicans and 3 Democrats.

These candidates and their respective Super PACs are struggling to communicate political platforms in a crowded arena. They are each vying for the attention of over 146 million registered voters and in order to effectively connect with Primary voters, they are allocating massive sums of money predominantly to advertise in local markets — Swing states such as Iowa, New Hampshire, and Florida.

Thus, voters can expect a saturation of political advertising on television as we progress closer to the election date, affecting brands in a manner called the “political crowd-out”.

Brands and the Political “Crowd Out”

The “political crowd-out” results from the legal precedent that television stations must charge lower rates for political campaigns, thus leading to higher costs for branded ads in order to recoup. This effect is heavily felt in key swing states where branded ad spots on local television stations can jump 10% to 200% from January to June 2016, and from September to November 2016.

The precise timing of the “crowd-out” period results from FEC regulations on campaign advertising that restrict the airing of radio and television ads to 30 days prior to a primary election, and 60 days prior to a general election.

What makes the 2016 election cycle unique is that the freedom enjoyed by Super PACs to advertise at any point during this election cycle may have the potential to extend the “crowd-out” period beyond the legal window.

Brands and the Election Cycle­ — A Shift in Audience Engagement

During an election cycle, the saturation of political media in television advertising changes the way audiences engage with brand advertising. This change in engagement is called the political “spillover” effect.

The spillover effect works like this: A significant percentage of consumers are likely to change the channel during political ads — more so when those ads are negative. The vast majority of ads tend to be negative so there is a chance a brand’s message can be lost if aired after a political ad.

While Super PACs may be pouring money into television advertising — $8.5 billion will be spent by candidates and PACs on television ads, compared to $1 billion on digital media — it’s difficult to determine if this type of media buying is having a tangible effect on poll numbers in this election-cycle. Several of the Republican Primary candidates who have large Super PACs devoting massive resources to television advertising are currently experiencing low poll-numbers, possibly because of the massive number of attack ads. By comparison, in the 2012 Presidential race the Obama campaign outspent the Romney campaign by a slight margin.

Naturally, television advertising numbers are not the sole deciding factor in an election, but high political spending often results in a victory. So far, this does not seem to be the case in 2016.

What’s this mean for brands? Taken together, it’s three challenges to overcome:

While that sounds tough, there are some caveats. While news and local channels will be sure to see a flood of political messaging, not every channel will be worth a campaign’s money to target. Plus, while TV is an effective and captivating medium, but digital channels are available — and their audiences are increasing.

Also remember that marketing’s strength is in delivering relevant messages. The brands most likely to succeed in this arena will be the ones who take advantage of the election cycle by providing refreshing and engaging ads that capitalize on a politically engaged audience.

A key example of this solution was Netflix’s House of Cards commercial that aired during the December 16th CNN debate. While online streaming services occasionally run ads on Network television, the choice to market a fictional political show to an audience already engaged with politics demonstrates a brand’s ability to capitalize on the shift in audience engagement. Data also suggests that politically and socially aware brands are more likely to be trusted. 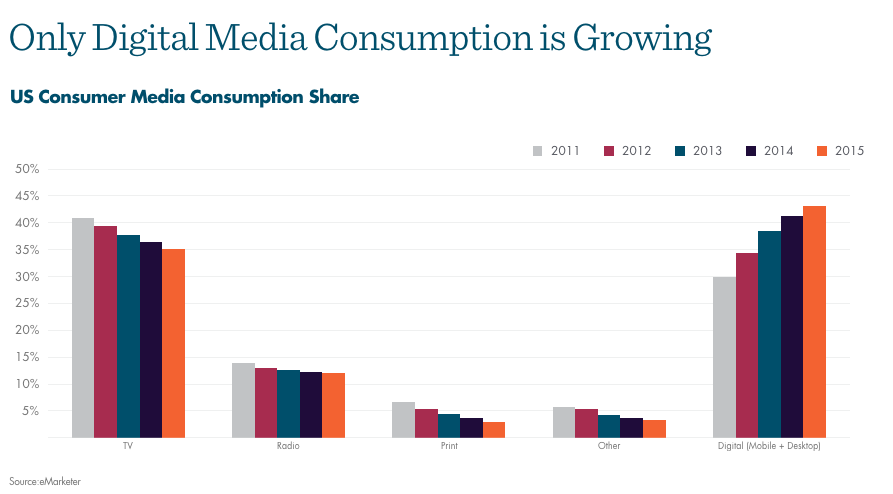 The opportunity to succeed in the charged political environment is there, despite the obstacles — the brands that can position themselves relevantly and interestingly stand the most to gain.