Calculating the Cost of Marketing

I know I want some great photos branded with my logo along with some persuasive copy. I also know I need to pay to promote my Facebook and Twitter posts, because the days of organic promotion are long gone. How will I balance that division between the cost of production and the cost of distribution?

If I allocate my money along the lines of the average ad budget, I’ll spend about $400 on creating the post — even though I could create the same ad for less through process efficiency and the through the use of briefs, letting me spend more on actually generating demand.

When we divvy up our advertising budgets, we typically think about how we split resources according to different channels or initiatives — social will get X% of our total advertising budget, the new tagline campaign will comprise Y% of the budget.

Almost half of the average marketing budget goes to advertising, and that is parceled out in the following amounts, according to The Hidden Cost of Marketing, a report based on our survey of over 300 enterprise U.S. CMOs, VPs, and Marketing Directors. (We’ll be presenting full findings this Thursday, January 14, at 1:00 pm EST.) 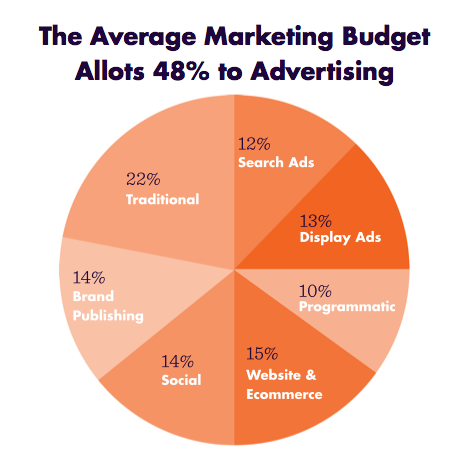 We don’t often dive deeper into these chunks of budget allotment. But those investments are more likely to meet and surpass goals if your team could cut down on content production and move more toward putting content in front of potential customers. Sales and brand awareness go up only when your audience actually sees the creative you produce. So if you could create the same ad for less money and roll those savings into distribution, you would.

Today, it is too high. Here’s the share of non-working spend by media category:

That high cost of advertising production is relatively the same, no matter what industry you’re in…

…as well as across revenue bands:

However, those costs grow with your annual marketing budget. The more you try to stretch your brand, the higher the share of content creation spend.

This means that if you have a $1 billion marketing budget, $270 million of it will be going to the production of advertisements. 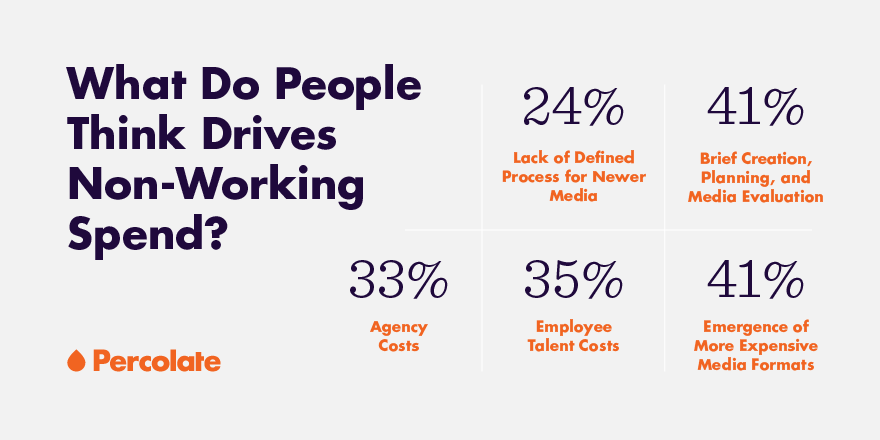 To be sure, some of these aren’t totally within marketing’s control. The emergence of new media formats like HTML5 will simply cost more to produce given the new technology involved. Some non-working spend is just the cost of doing business these days.

But there’s definitely fat to trim. A lack of process and inefficient briefing are almost wholly within marketing’s control, and are unnecessary drivers of production costs. To go back to my lemonade stand for a second: if I hire a photographer that works by the hour, I’m spending far more than I need to if I fail to enable coordination between the different parties in the photoshoot. And if I don’t provide a well-thought out brief, the photographer may have to perform yet another photoshoot to meet my expectations.

That’s why you need a system that combines standardized briefing, easy resource sharing, and efficient approvals. There’s too much friction in marketing activities that are routine; the entire process must improve and accelerate to reach as many people as you can without campaign delays and duplication of effort.

We’ll be writing more soon about how these production costs are growing and what you can do to control them. In the meantime, register for our January 14 webinar where we’ll delve into our findings and answer your questions about growing production costs.