Brands have more in common with traditional newsrooms than ever before. Digital tools are making it easier for them to reach and engage with audiences organically and focus on good storytelling. Adapting to this fast-paced environment, content marketing models are becoming more like brand news outlets. But as they step into the 24-hour news cycle, brands can expect to be held to new standards previously reserved for journalists.

Some brands, like GE, Cisco, Dell and Microsoft are building newsdesks and hiring journalists to adapt to the new environment. Others say that’s work best left to an agency, if necessary at all.

But some lessons from news outlets apply even outside the realm of written articles. Whether or not your brand is beefing up its news resources, here are five journalism practices that can help you tell better stories, run faster campaigns, and navigate breaking news situations that are rife with marketing opportunities.

This well-known phrase reminds us of the dark, sensationalist side of news organizations. More importantly, it alludes to the structure of a good story.

Put your most interesting content up front. In a newsroom, it’s known as the “lede,” and while it varies in style depending on whether it’s soft news or breaking news, its sole purpose is to hook the reader. Sometimes it’s an anecdote, while other times it’s a clever one liner.

Think about how movie trailers compel you to spend $11 dollars at the theater to see more. They’re called teasers for a reason.

The band Coldplay saw success in a campaign in the weeks ahead of the 2014 release of the album “Ghost Stories.” They hooked fans by hiding lyrics in library books across nine different countries, disseminating clues on Twitter. It set off a worldwide scavenger hunt and generated loads of additional content for the brand. Fan engagement? Check. Online buzz? Boom.

Brand managers should know what’s compelling about their product or campaign, and use it to draw in their audience without giving up the plot. A lot of brands make the mistake of starting with too much information, assuming people will stick around. Don’t “bury the lede.” Find a hook and stick with it.

The strength of Under Armour’s “I will what I want,” campaign that launched in 2014 was in the simplicity of the message. Because the athletic wear’s core idea was so well defined, it bred a great narrative.

A strong and easily comprehensible point is known in newsrooms as the “nut graf.” It includes just enough context and clearly spells out what’s important about your campaign or story. It tells your audience why they should keep paying attention. In a news story, it appears soon after your lede, and everything that follows should support it. It’s the compass for both your team and your audience as they interpret your message.

Before writing a brand blog post or constructing a new campaign, take the time to distill your idea into clear and focused nut, and refer back to it with each development.

3. It’s better to be late than wrong. And when you’re wrong, say so as soon as possible.

In the digital age, no mistake is overlooked. Thinking your audience might not notice that you deleted a tweet or committed a faux pas is foolish at best and reckless at worst. Take Paula Deen, for example.

On July 7, the celebrity chef came under fire after a tweet showing photo of her son wearing brownface was posted. It wasn’t the first time she’d gotten in trouble for perceived racism, making the response all the more critical.

Deen’s team said the chef herself had nothing to do with it. “Paula immediately had this picture taken down as soon as she saw the post and apologizes to all who were offended,” her spokesperson Jaret Keller said. In addition, the social media manager responsible for the tweet was fired, The Washington Post reported.

The damage was done. A tweet from Mic News summed it up: “Paula Deen tweets photo of her son in brown face, has literally learned nothing.”

Paula Deen tweets photo of her son in brown face, has literally learned nothing http://t.co/RQFDnH2FOm pic.twitter.com/AlhfOTpUib

No earnest social media manager would publish something wrong on purpose, but of course it happens. Mistakes should be followed with a genuine apology from brand’s highest authority. Deen could have personally done more to salvage her brand’s reputation.

Reddit CEO Ellen Pao took a more transparent approach to controversy the same week. “We screwed up,” she wrote in a letter responding to user outcry surrounding big changes to the online community. “Today, we acknowledge this long history of mistakes. We are grateful for all you do for reddit, and the buck stops with me.”

Pao followed through on her word, ultimately resigning a few days later. Her letter may not have saved her job, but it did help her brand regain control of the conversation. It demonstrated Reddit’s commitment to accountability and transparency. Like newsrooms, brands need the trust and loyalty of their audience. Taking responsibility and addressing mistakes as they happen is the best way to do that.

4. If your mother says she loves you, check it out.

You can minimize careless mistakes by verifying everything and trusting no one. That goes for tweets, research reports, information your colleague passed along, and even something your boss decreed. Check and double-check your sources, and don’t accept second-hand information. If it’s written content, print it out before publicizing, highlight all the names, dates, and figures, and check them again before the final print.

Even the most reputable institutions of journalism make mistakes when it comes to fact-checking. When Rolling Stone failed to vet its November 2014 story of a rape on the University of Virginia’s campus, the media fallout far overshadowed the message about how poorly America’s colleges handle sexual assault.

We may not see investigative stories like Rolling Stone’s from brands anytime soon. But as they move the way of newsrooms, brands have to be on guard for mistakes.

Delta Air Lines could have avoided a June 2014 social media gaffe with some basic fact-checking. In an innocent tweet congratulating the United States men’s soccer team for its win against Ghana, it posted an image of a giraffe to represent the African country. Unfortunately, there are no giraffes in Ghana. 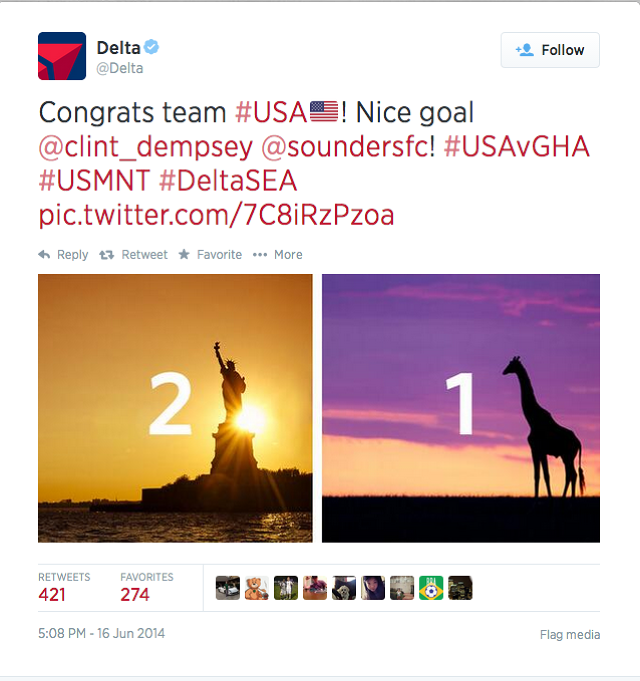 5. Your editorial calendar is your best weapon.

One of the greatest advantages newsrooms can have, especially in a breaking news situation, is being prepared for events ahead of time. Many events are planned, and can be placed on your calendar. Newsrooms create templates for any given scenario, so they can be ready to fire the minute something happens, whether it goes up, down or sideways.

Preparing for the unexpected is even more important. How can you seize on a perfect marketing moment and get something out before your competitors?

Marketers still talk about Oreo’s 2013 Super Bowl tweet, a timely and impactful response to unexpected power outage at the New Orleans Superdome during the game. It was made possible “because marketers and agency members were sitting together at a ‘mission control’ center, or a social-media war room of sorts,” monitoring social media and actively seeking opportunities, Ad Age reported.

Two years later, brand agility is less of a novelty and more of a requirement today. When the Supreme Court made its landmark decision on June 26 to legalize same-sex marriage across America, brands didn’t hesitate to celebrate on social media.

“Companies quickly attached themselves to this wave of happiness and sent out tweets that reflected positively on themselves and the news,” Digiday reported.

We’re on board. Diversity strengthens us all & today we celebrate #MarriageEquality & the landmark #SCOTUS decision. pic.twitter.com/gqej2xMzIU

Meanwhile, some brands that didn’t respond to the news faced scrutiny. In a newsroom environment, silence on an issue that matters to your audience can hold great reputational risk.

Using an editorial calendar is the best way to know when it’s most important to have all hands on deck. Streamlining workflow to determine how team members will swiftly collaborate in a breaking news environment is one of the greatest strengths of newsrooms. There’s no coincidence that it’s also the biggest opportunity in the evolution of content marketing.